wow see a guard army on that list twice is a major moral boost to me.

Geez, I didnt realize this but did we go a year without a league? Dallas won, then 9 months later Marshall took it. That sound right to everyone? 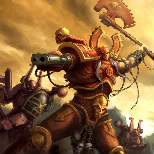 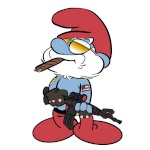 That list did kill my desire to play for almost a year.. hehe.

Lol, it wasn't all Dallas' fault for running MC spam (and who can blame him, when we were seeing multiple riptides, Ian and Tom I'm looking at you!). The end of 6th was all about max MC spam with crazy easy psychic powers to cast like invisibility.
But 6th was fairly unbalanced at the end, and the intro of 7th made me quit on the spot, though now ive come back around, and see 7th as the 'healing salve' it was meant to be.

I think we were hemorrhaging players pretty fast by the end of 6th, and after the "Canadin/adam debacle", older vets leaving (Ryan G, Ryan k etc) and the collapse of our own tourney scene it kinda just ker-plooped.

Its really back with a vengeance now tho. A lot of disenchanted ppl had gone over to infinity and now are back for the beer and pretzels play, there's sooooo many ppl who play totally outside this league and site, and the death of fantasy has only helped 40k really. 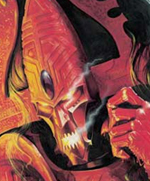 Oh.. Dallas has to take the heat on that one.. as we made lots of jokes about no one taking 3 wraithknights, but he still did. He knew thered be consequences! It wasnt just the wraithknights though.. it was also those 6th edition wave serpents and the ease you could prescience/fortune.

Hey... i love playing Dallas, but it is tough to shake that stigma.. he was running the screamerstar list for awhile as well. Its the only to keep things in check, answer for it in the community.

I remember Cam took double lash princes to a tournie and in the finals once.. he took heat on that for a few years.

For the playoffs, i really dont mind if people amp up their lists a bit.. we dont have any composition requirement, but just more a be reasonable agreement.

Where is that Dallas fella anyway.. i thought he was gonna play.more games?

I'm trying to convince him to join the nest league so hopefully we'll see more of him.

3+inv, jump MC, and when combined with nearby units, nearly impossible to assault?

In 7th, the riptide's fallen a bit. Still pretty beefy though. Wraith-knights experienced the opposite in 7th, went from beefy to absolutely nuts broken.

Of course I dont count your riptides Ian, with your dice the 'tides die by themselves more often than from me.

3+inv, jump MC, and when combined with nearby units, nearly impossible to assault?

In 7th, the riptide's fallen a bit. Still pretty beefy though. Wraith-knights experienced the opposite in 7th, went from beefy to absolutely nuts broken.

Of course I dont count your riptides Ian, with your dice the 'tides die by themselves more often than from me.

That 3+ invuln requires I pass a 3+ D6 roll which usually means it's exploded itself be turn 3.